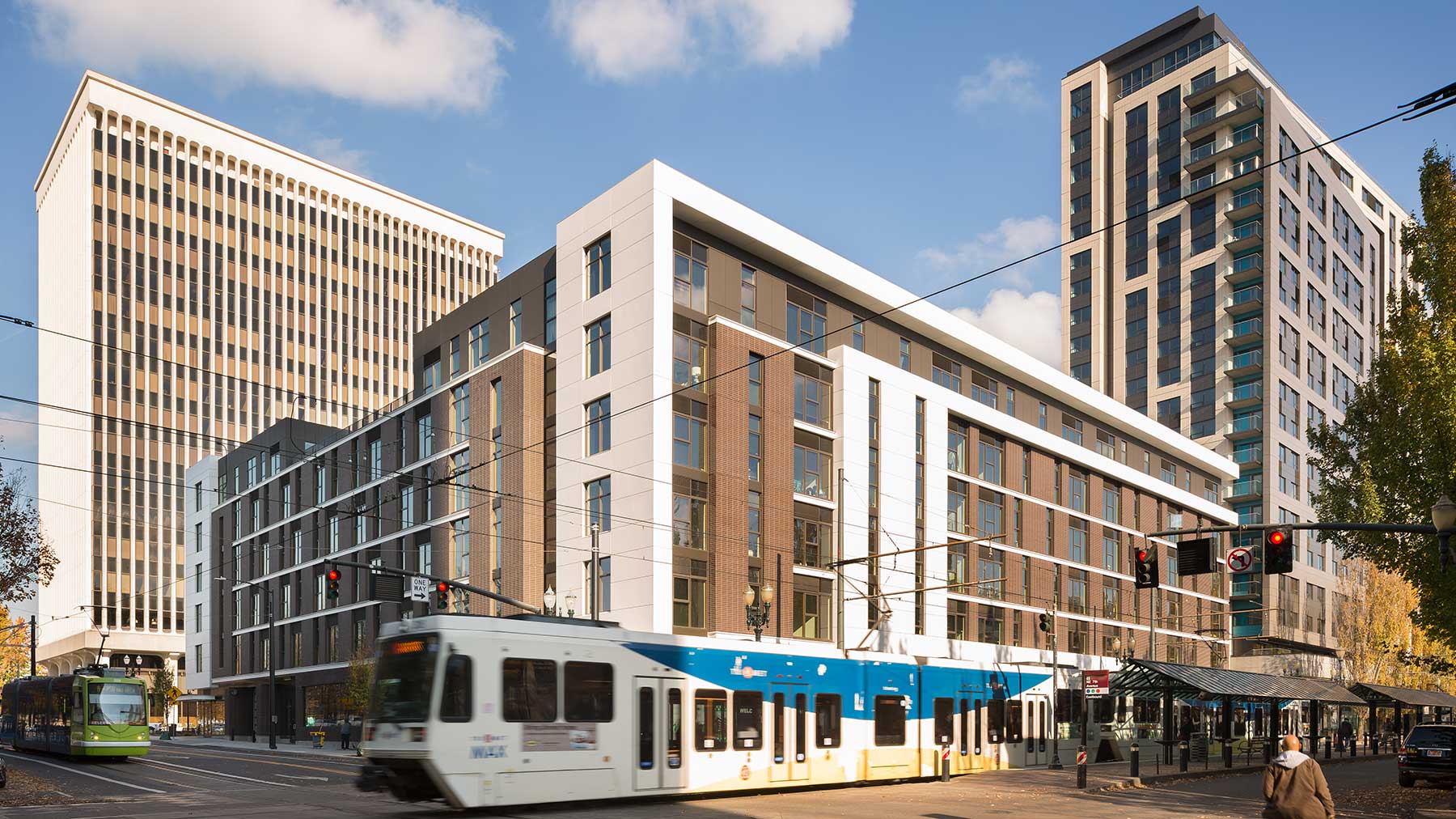 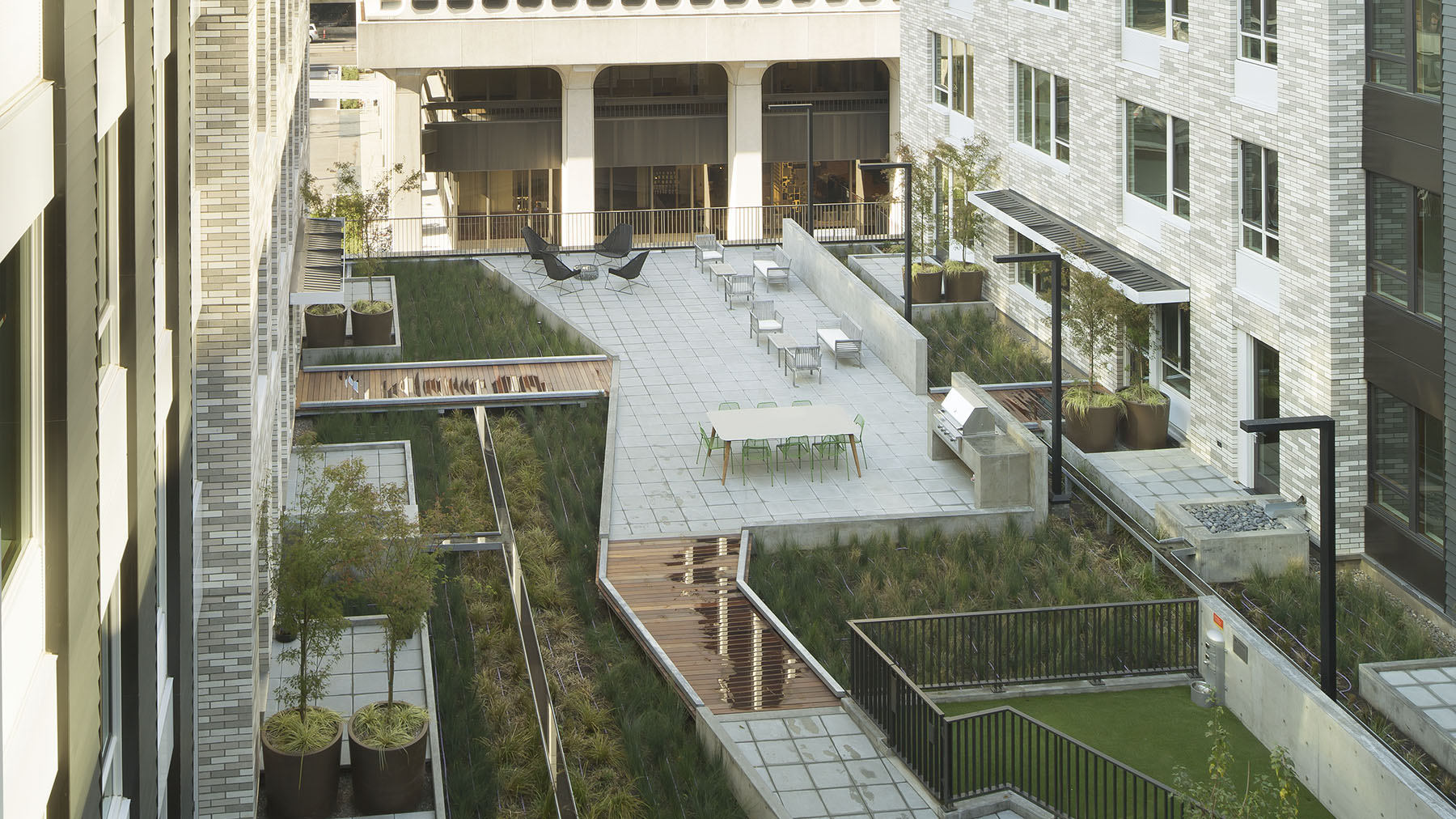 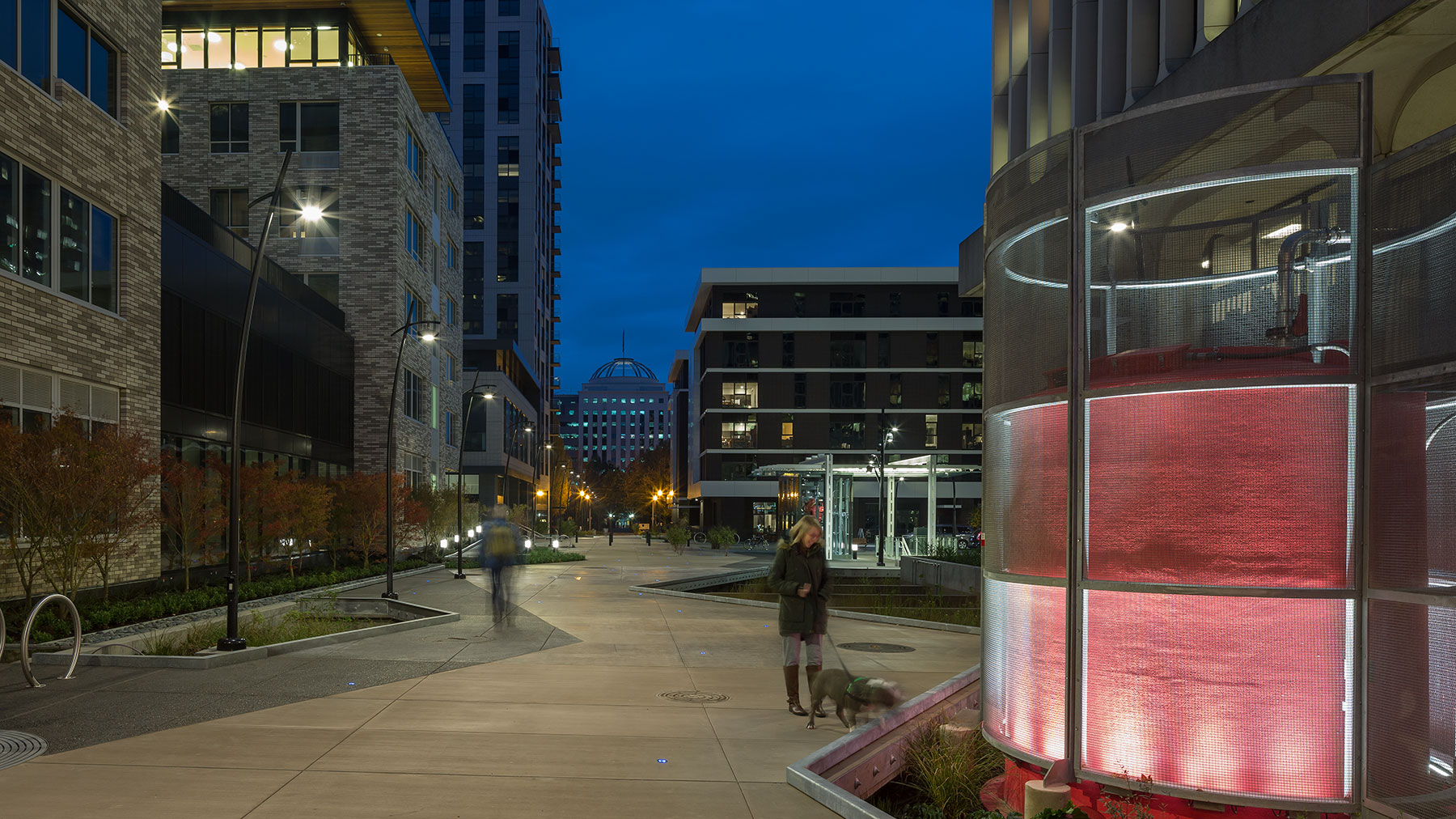 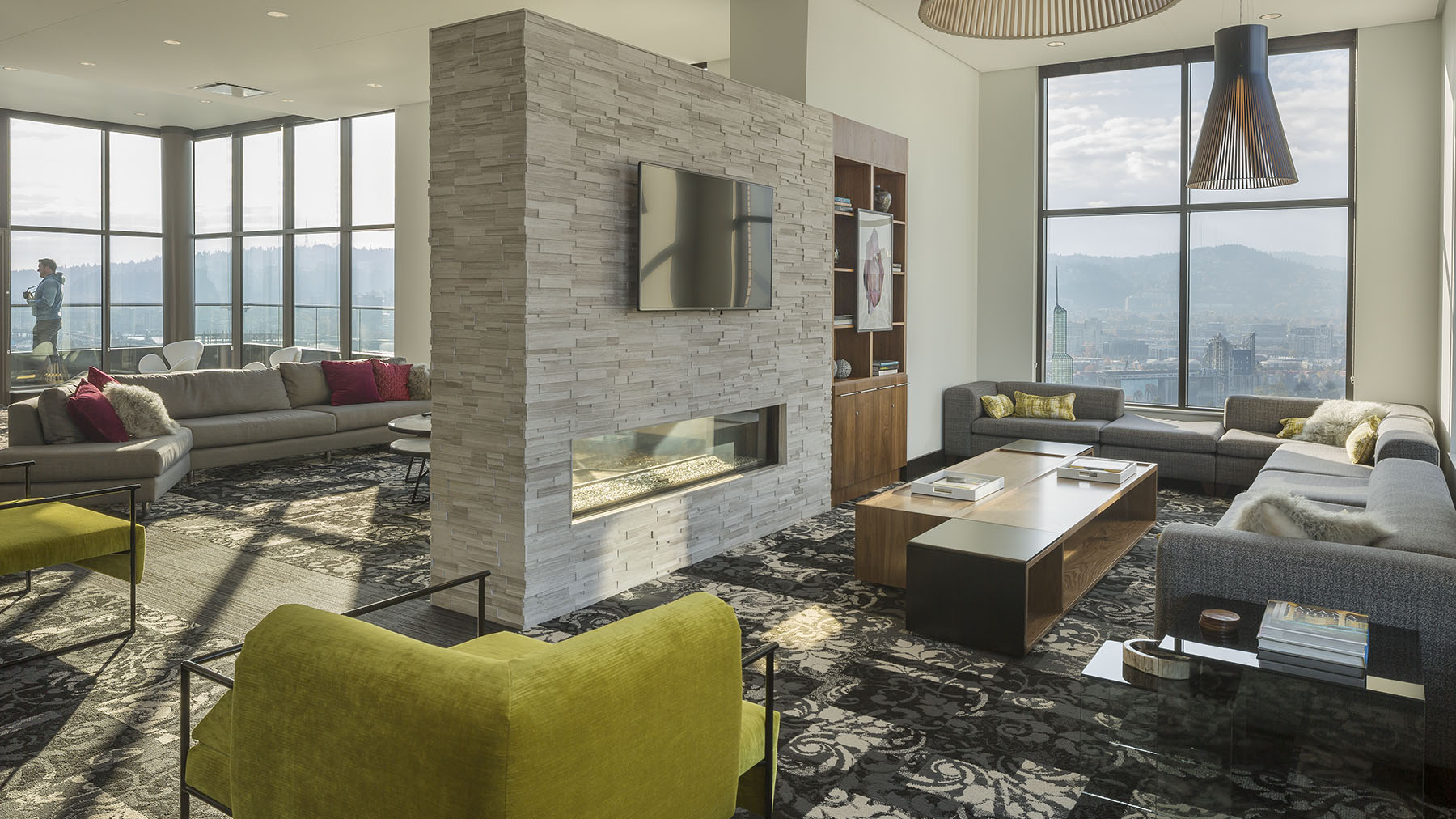 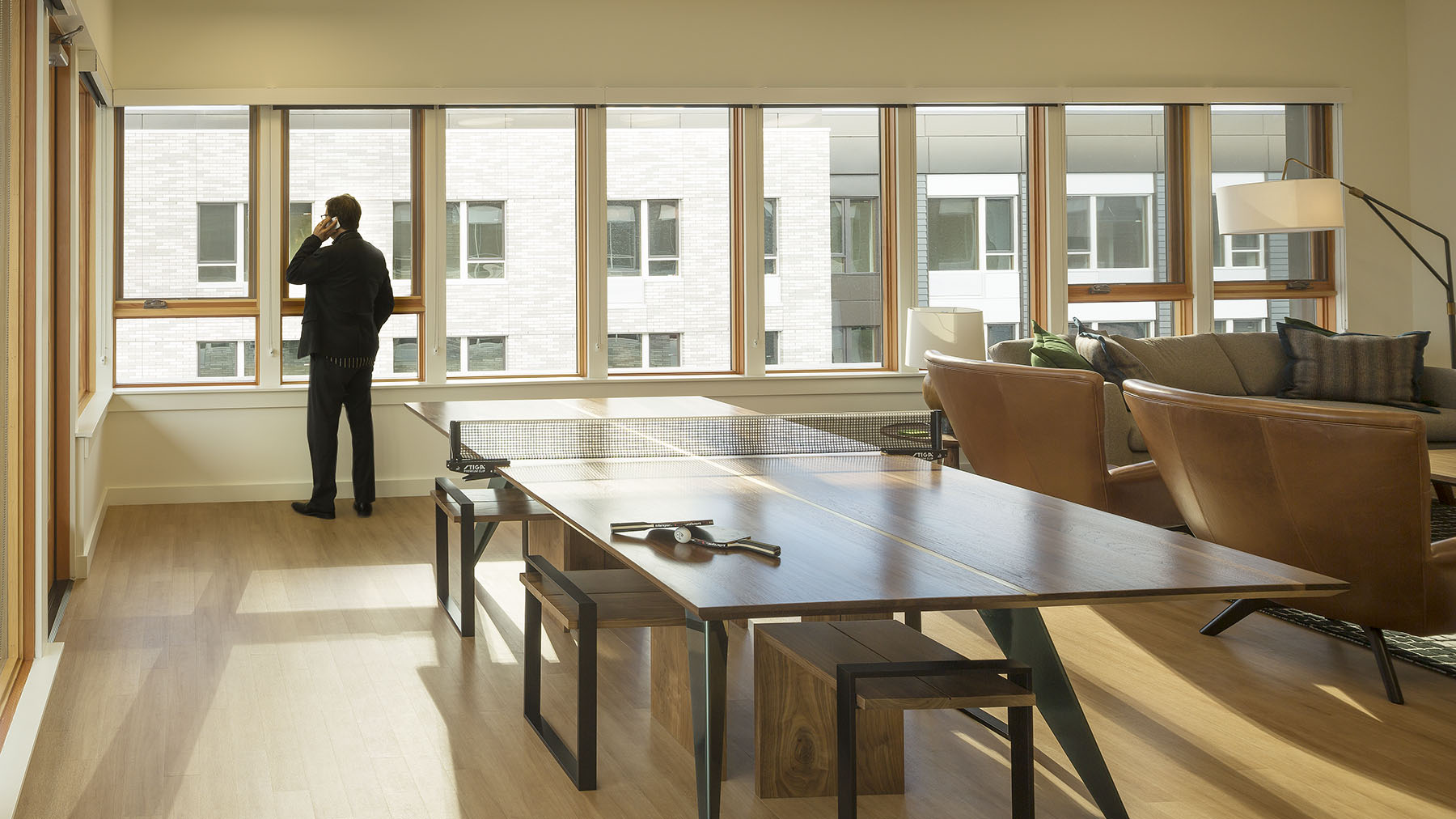 In the midst of a population boom, Portland has found itself in need of more residential space. With the city’s infrastructure not able to keep up with that need, new buildings must find ways to accommodate a growing population while not damaging the surrounding environment. Hassalo on Eighth was conceived as an EcoDistrict – a series of buildings that share sustainable building infrastructure – to at once ease the city’s housing squeeze, revitalize a neighborhood in need of development, and allow its tenants the ability to reduce their carbon footprint by nearly a third.

Glumac provided MEP engineering, energy analysis, technology integration, lighting design, and building commissioning services on the Hassalo on Eighth project. With a focus on water reclamation to reduce increased strain on the Willamette River, which runs directly through Portland, Glumac partnered with Biohabitats to design a waste water system that cleans sewage using bacteria in an artificial tidal wetland, which appears as typical planting beds in the landscape between each building. It has the potential to transform up to 54,000 gallons of sewage into reusable gray water every day, which is then used in toilet flushing, cooling, and irrigation, with any available excess used for groundwater recharge. A central condenser water loop connects the retail spaces in each building, facilitating thermal energy sharing throughout the district. In addition, the mechanical plant in an existing 12-story commercial building on the site was upgraded to serve commercial spaces in the new buildings.

Based on the savings gained in water, sewer, and system development charges, Hassalo on Eighth’s water system will pay for itself in four years and has achieved three LEED Platinum certifications.

In 2017, the project was named as the USGBC’s LEED for Homes Project of the Year. 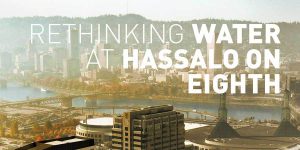 Rethinking Water at Hassalo on Eighth

Portland has a water problem…
Exponential growth in the downtown area over the last two decades has transformed this Pacific Northwest city into a model of development for the rest of the country. In the late-1990s, the development of the Brewery Blocks in the Northwest part of town helped transform the Pearl District from a largely blighted industrial area to one of the most attractive and sought out locations in the city. It also showed the sprawling impact an investment in sustainability can have. | Read More

EcoDistricts Systems:
Buildings Can Be Better Together

As we begin to emerge from the recession that has plagued the last half decade, restorative efforts are taking place in communities across the Pacific Northwest. The key is finding ways to reshape these areas in a manner that is beneficial to the environment, while not straining budgets. One significant approach we at Glumac feel is essential to these restorative efforts is a design strategy that was first developed here in the Pacific Northwest called EcoDistricts. | Read More