Isle, who has a background in biology, is leading the engineering firm’s investigation into biophilic design. The emerging philosophy is based on the concept of biophilia, which means “love of life,” and seeks to find design solutions that enable people to enjoy this affinity to nature indoors.

This can be as simple as letting in sunlight and fresh air, or using carpet or furniture patterns with naturalistic designs or fractals. Other biophilic design concepts include ventilation systems that periodically let out puffs of air to mimic the air fluctuations found outside, or indoor spaces tailored to fit primal needs.

“Biophilia is a reminder that nature
supports us in so many ways.”

Architectural designs inspired by nature not only are aesthetically pleasing, Isle said, but also make economic sense. Numerous studies have shown that connecting office workers to nature raises productivity levels by stimulating brain activity and keeping people alert, she said. Retailers have found that customers buy more of a product displayed in a portion of the store lit by skylights. Studies in schools and hospitals have shown access to daylight can help students learn and patients heal faster. 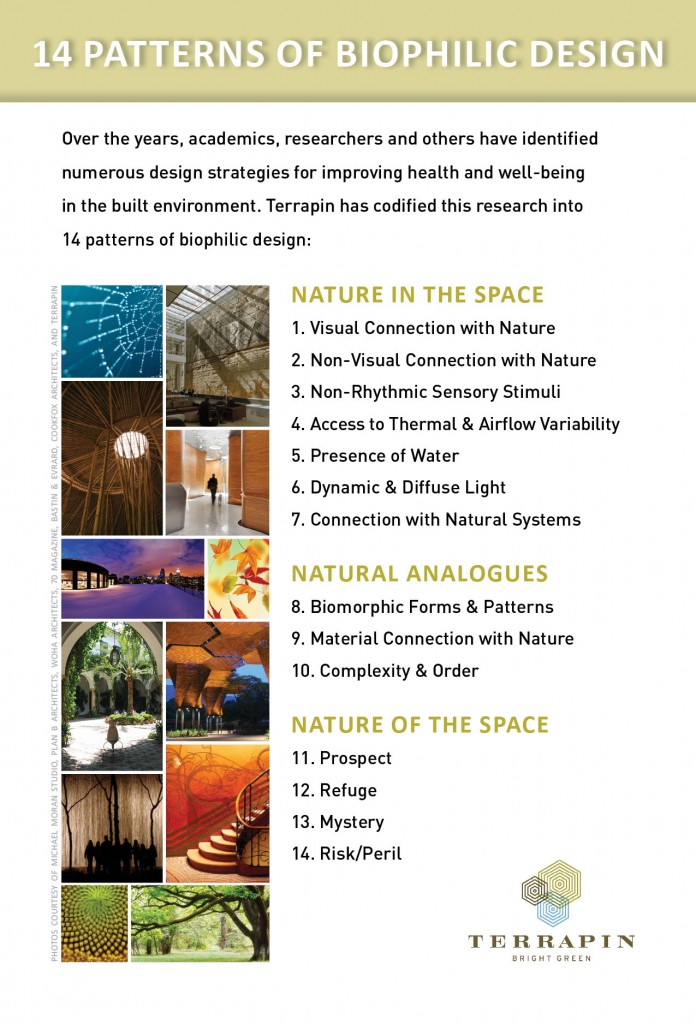 “There is economic value in connecting people to nature … so we started our own research into it,” Isle said.

A focus on our instinctual response to nature is how biophilia differs from the concept of biomimicry – using plant and animal behavior to solve human issues, she said.

“Biophilia is this innate connection to nature,” Isle said. “We need it like we need healthy food and exercise.”

Earlier this summer, Glumac hosted a lecture series, “Biophilia in the Built Environment,” in Seattle, San Francisco and Los Angeles; experts shared lessons with the design and build industry. Firm staffers have incorporated biophilic design into newer offices in Shanghai and Los Angeles, and are hoping to convince clients to include it in their projects, Isle said. Pointing out the economic benefits will be key to selling the importance of biophilic design, she said.

“This is the path that we’ve chosen because we find it very interesting,” she said. “There is a lot of good data. Now we can talk to our clients with real numbers. It helps build the business case for it. You’re also talking about improving the ability for your employees to perform, so there’s a real human element.”

Glumac staffers were inspired to learn more about biophilia via the work of Bill Browning, founder of New York City-based environmental consulting and strategic planning firm Terrapin Bright Green. Browning, who spoke at all three of the Glumac biophilia events, is one of the authors of a Terrapin  Bright Green report titled “The Economics of Biophilia: Why Designing with Nature in Mind Makes Financial Sense.”

“There’s real science being done on why our connection to nature is so important.”

The report points out that scientific studies show employers can improve worker productivity and profits with simple office space improvements, such as providing access to plants, natural views and daylight. One such study found that workers in an administrative building at the University of Oregon, who had views of trees and landscape, were less likely to take sick days and spend more time at their desks than those with no view.

Scientific research that backs up the benefits of biophilic design is one reason why Jeff Roberts, a senior architectural designer at Portland-based SERA Architects, incorporates the concept into all the projects he works on.

“Biophilia is grounded in our DNA,” he said. “There’s real science being done on why our connection to nature is so important.”

In many ways, biophilic design is intuitive, Roberts said. He often hones in on what makes nature so attractive, like the variety of plant heights and colors found in a meadow or the shadows cast by trees on the forest floor. One recent apartment project he helped design has a pattern on the façade inspired by water ripples.

“There’s a lot going on in those natural places, and how do we recreate that in the places where we live and work?” Roberts said. “I’m looking at (design) through a biophilic lens.”

Variety found in nature is one reason why building façades often are more intriguing if they have varying window sizes or undulate and erode like a geologic form, he said. Biophilic design also responds to primal desires, such as providing vantage points where people can overlook a room or seating where they feel protected.

With people spending the majority of their time indoors, it’s important to remember our roots, Isle said.

“We’ve separated ourselves from nature,” she said. “Biophilia is a reminder that nature supports us in so many ways.”

This article was originally published in the Portland Daily Journal of Commerce on September 10, 2014